Every night at 8, the stern-faced newscaster on Myanmar military T.V. announces the day’s hunted. The mug shots of those charged with political crimes appear onscreen. Among them are doctors, students, beauty queens, actors, reporters, even a pair of makeup bloggers.

Some of the faces look puffy and bruised, the likely result of interrogations. They are a warning not to oppose the military junta that seized power in a Feb. 1 coup and imprisoned the country’s civilian leaders.

As the midnight insects trill, the hunt intensifies. Military censors sever the internet across most of Myanmar, matching the darkness outside with an information blackout. Soldiers sweep through the cities, arresting, abducting and assaulting with slingshots and rifles.

The nightly banging on doors, as arbitrary as it is dreaded, galvanizes a frenzy of self-preservation. Residents delete their Facebook accounts, destroy incriminating mobile phone cards and erase traces of support for Myanmar’s elected government. As sleep proves elusive, it’s as if much of the nation is suffering a collective insomnia.

Little more than a decade ago, the most innocuous of infractions — owning a photograph of pro-democracy leader Daw Aung San Suu Kyi or an unregistered cellphone or a single note of foreign currency — could mean a prison sentence. Some of the military’s Orwellian diktats rivaled those of North Korea. 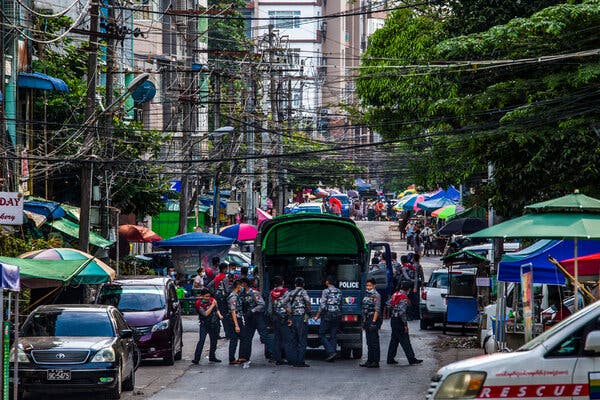 Security forces search for protesters as they crack down on a peaceful demonstration against the military coup in Yangon, in April.Credit…The New York Times

Three months after Myanmar’s experiment in democracy was strangled by the generals’ power grab, the sense of foreboding has returned. There is no indication that it will ease. For the better part of 60 years, the military’s rule over Myanmar was animated not by grand ideology but by fear. Today, with much of the population determined to resist the coup-makers,