In his latest offering, the unnerving universe of Roger Ballen’s photographs grows another dark layer through the words of Italian poet Gabriele Tinti.

A casual passerby catching a glimpse at a Roger Ballen photograph would be excused if they were to assume the picture was made by a madman. This perception defines the vision and definition of Ballen’s oeuvre, consisting of tableaux that combine theatricality, primitive wall drawings, and dark, strange and surrealist overtones that perform as windows into a troubled and snarling soul. 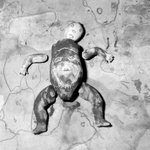 It’s not a stretch to consider Ballen an outsider photographer, forging his own unique path through the potentials of the medium. However, he also works within a rich lineage of photographers who venture into territories of horror, surrealism, and the grotesque. It’s a space occupied historically by photographers such as Eugene Meatyard, Joel Peter Witkin, Les Krims, Arthur Tress, Asger Carlsen, Allen A Dutton, Diane Arbus, and others whose pictures cut into the areas of the human psyche that typically hide in the shadows. In A.D. Coleman’s 1977 book, The Grotesque in Photography, the critic breaks down the work of such photographers as a revolutionary developing trend akin to impressionism, largely according to the emphasis of grotesque photographers to pursue constructed imagery and unrealities that held disturbing subject matter as their centerpieces.

When moving from picture to picture in Ballen’s latest book, The Earth will Come to Laugh and Feast, one gets the sensation of touring an asylum, peering into padded rooms, each containing its own cacophony of crude drawings, odd symbolisms, and unsettling gesturing of human form. In an interview accompanying the book, the South African photographer states that he takes photographs “to better understand who the person called Roger Ballen is…”.