The random drawing came after a December runoff ended with 1,010 votes each for the two candidates running for mayor of Dickinson, a Houston suburb. 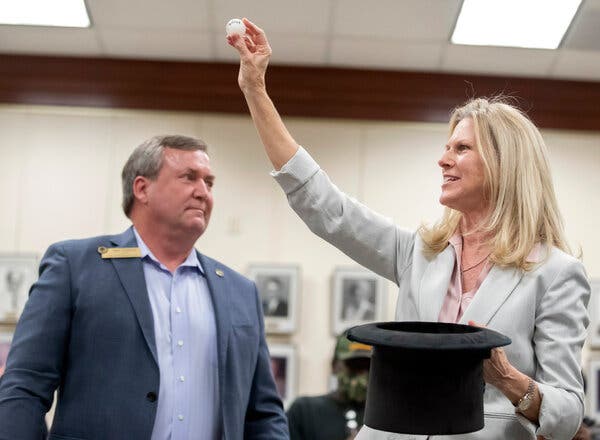 Mike Foreman, the mayor of Friendswood, Texas, and Julie Masters, the mayor of Dickinson, Texas, settling a tie vote for mayor in Dickinson with a random drawing.Credit…Stuart Villanueva/The Galveston County Daily News, via Associated Press

There were no lawsuits, no cries of election fraud and certainly no angry mobs storming the seat of government. Instead, a tie between two candidates running for mayor of a Houston suburb was settled after their names were drawn from a top hat.

“It was as fair as you can make it,” said Jennifer Lawrence, who lost the random drawing on Thursday night. “I feel like this is how it was supposed to go. It’s disappointing, but it is what it is.”

The winner, Sean Skipworth, said that while he was certainly pleased that he had won, he had his reservations about handing democracy over to fate — in this case, two Ping-Pong balls, each one signed in black pen by one of the candidates, that were placed inside the hat.

“It was really exciting, but it’s a horrible way to resolve an election,” he said. “It’s always better to have people decide elections, not random chance.”

The drawing in Dickinson, a city of about 21,000, roughly 30 miles southeast of Houston, was allowed under a Texas election law that permits ties to be resolved by the “casting of lots,” or a game of chance, said Elizabeth Alvarez, a Texas election lawyer. It could be darts, a coin toss or a roll of the dice, she said.

It doesn’t happen often, she said, given the improbability of an exact tie, but it has happened before.

After Capitol siege, majority of Americans say Trump should be removed from…