Marvel is bringing the first Asian superhero, Shang-Chi (pronounced like “song”), to the big screen. Shang-Chi and The Legend of The Ten Rings is coming to theaters on September 3. Shang-Chi is a Chinese superhero–aka The Master of Kung-Fu. This film is one of many superhero movies that Marvel plans to debut in Phrase Four. The superhero franchise dropped a highly anticipated teaser that sent fans in a frenzy along with the movie’s release announcement.

Here’s everything we know about Shang-Chi and The Legend of The Ten Rings, from its updated release to its new cast members.

When will it be released?

Shang-Chi’s debut movie will premiere in theaters on Sept. 3, 2021. On April 19, Simu Liu, who plays Shang-Chi, posted on his Instagram announcing the release date for the film, along with the first teaser poster of his character. Due to the pandemic, the film is being released nine months after the original date.

Marvel has yet to confirm if the film will be available on Disney+ on the same day the film will premiere in theaters, similar to Mulan and the upcoming Black Widow. 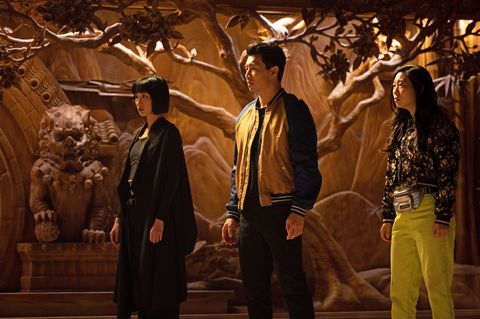 Fala Chen as Jiang Li, Simu Liu as Shang-Chi, and Awkwafina as Katy.

On April 19, the cast and directors spoke to Entertainment Weekly

about the upcoming film. In the executive interview, Awkwafina talked about the cultural significance of the movie.

“It was a level of Asian representation that I haven’t seen, and I thought it was cool as an Asian American to watch,” she said. “It definitely explores different levels of identity.”

Liu has long had hopes of playing an Asian superhero. In December 2018, he tweeted at Marvel about the movie. After his tweet, the franchise sent an invitation for a live audition. After he was cast in the role in July 2019, he tweeted “Well shit” in response to his 2018 tweet.

In the EW interview, Liu talked about his excitement for the role.

The most exciting thing about stepping into this character was that his backstory has never been told before. We know so many different versions of Batman’s origin story, how his parents were murdered when he was very young. We know Peter Parker, who was bitten by a radioactive spider, and he loses his uncle. Shang-Chi’s story is very much unknown to most of the world, so we had a lot of freedom and creative liberty to make it the way that we wanted to.