Her film for City Ballet’s virtual spring gala, featuring a new solo by Justin Peck, explores the nooks and crannies of the company’s theater. 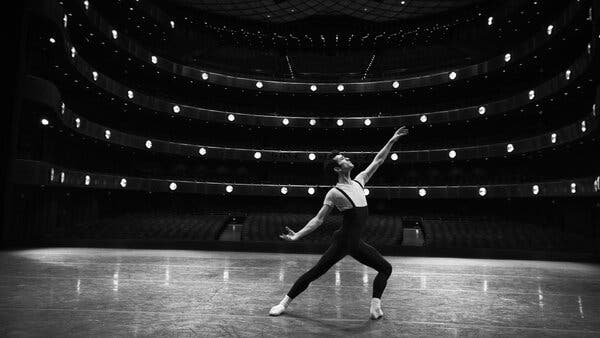 Sofia Coppola doesn’t come from the dance world. Does it matter? Her films have always had an understated choreographic elegance — a dreamy pacing that can make a pause feel like a musical note or crystallize an everyday gesture into a sensation. She pays attention to the in-between moments. Even though her films aren’t about dance, that’s exactly what they do: They dance.

Her latest, for New York City Ballet’s virtual spring gala, breathes air back into a the David H. Koch Theater, from its narrow hallways and florescent studios to its darkened wings, rows of empty velvet-covered seats and, finally, its vast landscape of a stage. Every step of the way tells a story without words. A steady gaze of the camera through a doorway showing bags of unused pointe shoes? Coppola somehow reveals the truth of a space without rendering it sentimental.

Much of the 24-minute film, shot by the cinematographer Philippe Le Sourd, is in black and white; when it shifts to color for the final dance — the finale of George Balanchine’s majestic “Divertimento No. 15” — it’s as if the kingdom in “The Sleeping Beauty” had come to life after 100 years of slumber. The pandemic has put a halt on the performing arts since March of 2020, and for dancers, that’s been an irreplaceable time of lost performances. Coppola’s film, conceived with the company’s resident choreographer and artistic adviser, Justin Peck, is an awakening. (The film will be on the company’s website and YouTube, beginning Thursday at 8 p.m.