It is one of the oldest religious symbols: the lotus flower, blooming out of muddy waters.

The mud represents our suffering, pain and delusions, said Duncan Ryuken Williams, a Soto Zen Buddhist priest, retelling the ancient lesson. And the purpose of Buddhism is to rise above.

But there’s an even deeper metaphor: In pure water, a lotus flower will not grow.

It is in the mud that the nutrients are found. 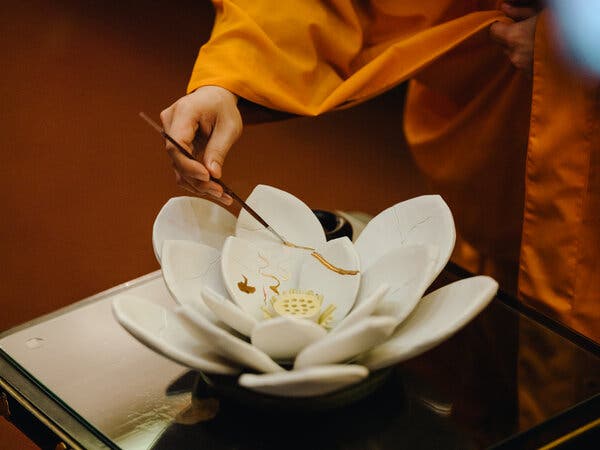 “And so our liberation is actually not about transcending or distancing ourselves from trauma or pain and suffering, but it is to acknowledge how we can transform ourselves, our communities, our nation, our world, from all that pain,” he said.

This was the symbol at the heart of a national memorial ceremony in Los Angeles on Tuesday, offered by 49 Buddhist monastics, priests and lay leaders for healing amid recent anti-Asian violence across America.

They gathered 49 days after a gunman killed eight people including six Asian women at spas in the Atlanta area, to mark the moment many Buddhists believe the deceased transition to another realm. They met at a place of pain, a temple in Little Tokyo that had recently been vandalized in an arson attack.

“We join today to repair the racial karma of this nation, because our destinies and freedoms are intertwined,” said Dr. Williams, the chair of the University of Southern California’s School of Religion, who helped to organize the ceremony.

“And though the mountain of suffering is high and the tears of pain fill the deepest oceans, our path compels us to rise up like a lotus flower above muddy waters,” he said.

Together the ordained sangha, or clerics, chanted and offered mending rituals to heal what has been broken. Some 350 Buddhist temples and hundreds of individuals participated via livestream, from Hawaii to Nebraska to North Carolina.

It was a uniquely American, and uniquely modern, moment. The sangha represented the vast range of Buddhist lineages and ethnicities, including Chinese, Khmer, Korean and Vietnamese traditions, coming together as one spiritual community. A Mexican-American monk serving a Buddhist temple for the Thai community in North Hollywood shared a message in Spanish. About two-thirds of U.S. Buddhists are Asian-American, and many temples are increasingly multiracial.

In the 2,500-year history of Buddhism, ceremonies with such diverse participants across traditions are rare. Laotian Buddhists do not typically practice alongside Japanese Buddhists, or predominantly African-American or white Zen centers alongside immigrant Buddhist communities.

Buddhist philosophy has something to offer in this moment of fear, said Sister Kinh Nghiem, 38, a Vietnamese-American Buddhist nun who came to participate from Deer Park Monastery near Escondido, Calif.

The leaders lit candles in front of memorials, honoring ancestors. For Yong Ae Yue, 63, a Korean Buddhist mother killed in Atlanta. For Vicha Ratanapakdee, 84, an immigrant from Thailand who was fatally assaulted while taking a walk in San Francisco. For Chinese immigrant coal miners shot and killed in Wyoming in 1885.

For all beings who have lost their lives through racial or religious hatred. The Sikh victims in Indianapolis. The prayerful in synagogues. George Floyd.

A Rise in Anti-Asian Attacks

A torrent of hate and violence against people of Asian descent around the United States began last spring,