‘Murder the Media’: How Reporters Became a Target on Capitol Hill

“Murder the media” was scratched right into a door of the Capitol. Violent protesters smashed gear and punched a photographer. 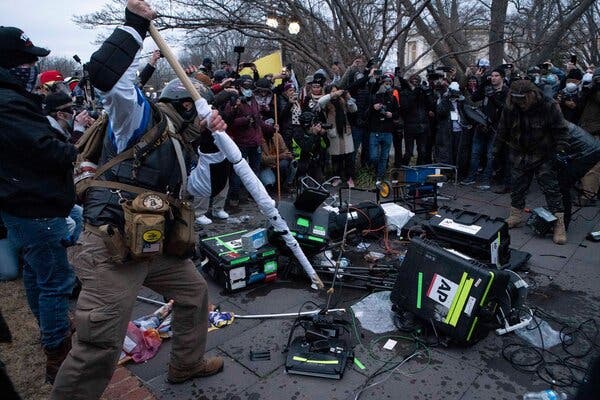 Smashed cameras. Threats. The phrases “Murder the media” scratched into a door of the Capitol.

As Trump supporters rampaged on Wednesday, incited by the president’s false claims of a stolen election, they hit on a secondary goal: journalists.

Members of the information media who have been reporting from the streets and squares of Washington have been threatened and surrounded, and their colleagues contained in the Capitol have been compelled to shelter in safe areas for hours.

A video taken by William Turton, a Bloomberg News reporter, confirmed a crowd outdoors the constructing advancing on a digicam crew, yelling, “Get out of here,” and smashing gear. Paul McLeod, a Buzzfeed News reporter, shared a photo of a noose the group had long-established out of a digicam wire and hung from a tree.

Some within the mob chanted “CNN sucks” as they stomped on cameras, although the gear was labeled with stickers from The Associated Press. (A spokesman for The A.P. confirmed that its gear had been stolen and destroyed, including that none of its workers members had been injured.)

Mr. Turton, who was in Washington to report on disinformation, mentioned in an interview that these within the crowd had turned their consideration to the small media pen after the police had pushed them out of the Capitol constructing.

“After that happened, they chased anyone with a camera out of there,” he mentioned. “I noticed this Italian TV crew they chased out,