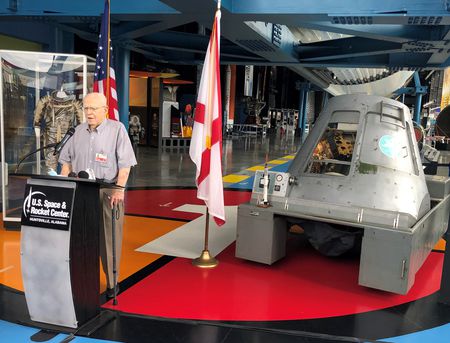 Retired NASA engineer Jay Foster, who was part of the team that built the Redstone rockets that carried the first American, Alan Shepard, into space, speaks May 5, 2021, while standing next to a space capsule simulator where Shepard and other astronauts trained. (Paul Gattis | pgattis@al.com)

It’s perhaps a forgotten anniversary, overshadowed by much grander accomplishments in the U.S. space program.

But the 60th anniversary Wednesday of the first American in space – Alan Shepard’s blink-of-an-eye trip in the tiny Freedom 7 space capsule – gave Huntsville another opportunity to tout its space bona fides, an opportunity too tempting to pass up amid the political wrestling match over U.S. Space Command.

The Air Force in January, of course, selected Huntsville as its “preferred location” for Space Command. It also ignited a full-throated protest from Colorado, where Space Command is currently located.

There have been accusations from Colorado officials of Huntsville as simply a bizarre choice with no sensible foundation to calls for investigations into the selection process.

All the while, Huntsville has remained quiet while preparing to welcome Space Command to Redstone Arsenal.

The Shepard anniversary, however, was a moment to remind anyone listening that America’s space program first steps were taken in Huntsville.

The Redstone rocket that propelled Shepard into space generations ago was designed and built in Huntsville. And the Space Launch System, NASA’s new heavy lift rocket, is managed in Huntsville at Marshall Space Flight Center and anticipates its inaugural flight later this year.

Ultimately, it’s the vehicle planned to return Americans — including the first woman and the first person of color — to the moon.

Huntsville Mayor Tommy Battle and Marshall Space Flight Center Director Jody Singer also spoke at the press conference, touting the Rocket City’s past as a window to its future.

Singer followed him at the microphone, saying, “Milestones like today remind us of the significance of what we are trying to accomplish and our current endeavors. And it helps underline why we explore.”

There was even Jay Foster, a retired NASA engineer who worked on the construction of the Redstone rocket generation ago who remembered, “It was quite an exciting time and quite a busy time.”

Of course, an illustrious history of space flight does not necessarily make Huntsville the best choice for Space Command. According to the Air Force comparisons between Huntsville and Colorado Springs, the Rocket City is by far the better choice.

But just as a reminder, on the 60th anniversary of Shepard’s flight,