The recommendation by the election commission came a month after a Times investigation showed that Donald J. Trump’s political operation had steered many unwitting supporters into repeated donations through the tactic. 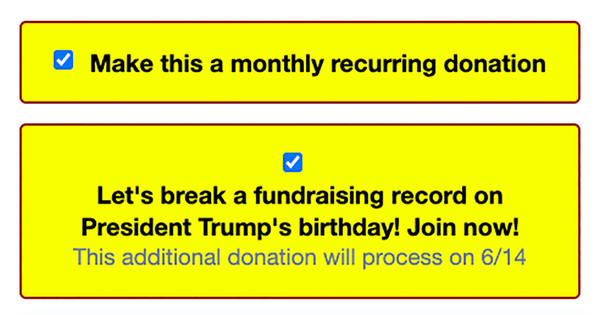 The Federal Election Commission voted unanimously on Thursday to recommend that Congress ban political campaigns from guiding donors by default into recurring contributions through prechecked boxes, a month after a New York Times investigation showed that former President Donald J. Trump’s political operation had steered huge numbers of unwitting supporters into repeated donations through that tactic.

The bipartisan commission, which serves as the nation’s top election watchdog agency, is divided evenly between three Democratic-aligned commissioners and three Republicans, a composition that often leads to stalemate. But commissioners of both parties, including three Republicans appointed by Mr. Trump, came together on Thursday to ask Congress to strengthen campaign finance law to protect online donors.

“It’s important that donors be able to exercise their choices freely,” Ellen L. Weintraub, a longtime Democratic commissioner on the F.E.C., said in an interview. “If their money is being taken from them because of some reverse checkoff option they didn’t notice, then they are not giving their money freely.”

The Times investigation showed how the Trump operation, facing a cash crunch last fall, had deployed prechecked boxes to enroll every donor in weekly withdrawals — unless they unchecked the box. Then the Trump operation made the disclaimer that disclosed that fact increasingly opaque with extraneous text.