Home » News » As Trump Reels, Fox News Has a Message for Viewers: Stick With…
News

As Trump Reels, Fox News Has a Message for Viewers: Stick With…

As allies abandon the president, his favorite network revives familiar villains for the Biden era. And the prospects for a Trump TV media venture are “greatly diminished.” 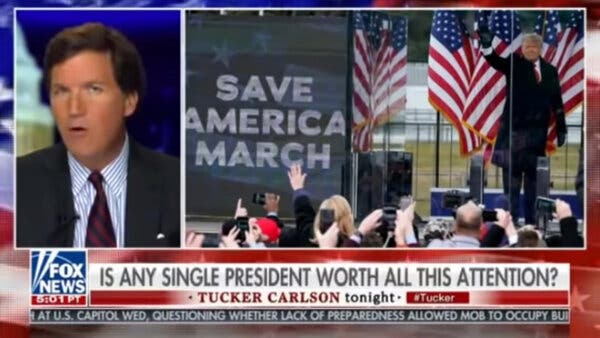 In his monologue the day after the siege on the Capitol, the Fox News host Tucker Carlson told his viewers, “You need a defender.”Credit…Fox News

His president reeling, his cable network at a crossroads, Tucker Carlson began his show on Thursday night asking a question that has echoed for weeks among anchors and producers at Fox News: “What is life going to be like for us on Jan. 21?”

“Who has got your concerns top of mind? Who wakes up in the middle of the night worried about your family?” Mr. Carlson asked his flock, acknowledging that Mr. Trump would be gone in two weeks “and we cannot change it.”

The imminent end of the Trump presidency has presented a challenge to the enormously popular, enormously profitable Fox News — the crown jewel of Rupert Murdoch’s American empire — whose right-wing stars yoked themselves to Mr. Trump more tightly than any other mainstream pundits over the past four years.

Prime-time hosts like Mr. Carlson and Sean Hannity spoke darkly of possible voter fraud and irregularities. But privately, senior figures at the network acknowledged a struggle to thread the needle between the president’s bogus (and possibly defamatory) fraud claims, and the demands of an audience that was increasingly confused at the discrepancies between Mr. Trump’s lies and the reporting on Fox News, which declared Joseph R. Biden Jr. the president-elect on Nov. 7.

Executives at Fox News are unfazed by the lamentations of liberal critics,

Shirtless, Horned Capitol Rioter And QAnon Enthusiast Has Been Arrested